Durga Bhajan Mandli consists of ‘sewadars’, who want to serve ‘mahamai’ without demands of ‘phal’. We are willing to help the Indian Community all over the world performing Jaagran, Chowki and Pooja. We don’t have any policies, because in ‘bhagti’ there is no demands, no rules and no needs. 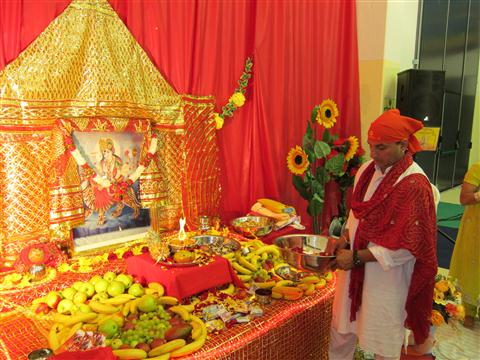 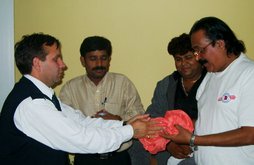 Lack of Hindu Traditions in Denmark led to the foundation of DBM.

After long waiting ‘Maa Bhagwati Jaagran’ took place in Denmark in 2003. At this occasion some of the devotees decided to invite the well known Mahant Shri Chandar Bali Sharma & his Mandli. He kindly agreed to perform the holy tradition after along gab of 11 years. This was performed on the night of 13th September 2003

On such auspicious event, the traditions indicate that the performer shall be given an invitation, which is called ‘Dall’. A gathering of supporters took place on 11th September 2003 and the ‘Dall’ was given to Mahant Ji. The meaning of ‘Dall’ is described in the glossary appendix. In this gathering, S/Shri Vijay Kumar Jain, Rakesh Kumar Salwan, Rajender Bagga, Virender Puri, Pardeep Kumar Sharma, Chaand Hadiabadi Shukla and Manjit Kumar were present.

On this auspicious night, Mahant Ji were honoured with a Shield given by the Indian Community of Denmark. The whole mandli participated to make the ‘Maa Bhagwati Jaagran’ complete in accordance with Indian Traditions and made it a success.

A few days later, the participants invited Mahant Ji to convey their sincere thanks before they leave from Denmark. A ‘Vachan’ was given by Mahant Ji that he would come again to raise the honour of Danish-Indian Community by performing again. 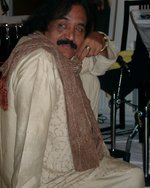 His ‘Vachan’ was fulfilled 14 months later, he accepted the invitation to perform for the third time. The foundation of DBM was laid in the mean while. The orchestra has turned out to be professional one on account of hardwork by all. A number of Chowkis has been performed with Aashirwaad of ‘Mahamai’ consequent to the encouragement of the Durga Bhajan Mandli of Denmark. The Mahant Ji again came to perform the ‘Maa Bhagwati Jaagran’ when, Shri Anil Kumar was given an opportunity to perform on such holy night along with the professional Mandli which came from India. Mahant Ji were pleased with the performance of Anil Kumar who was told to keep of the work for the contuined performence of DBM.

With the Blessing of Mahamai’s and Mahant Ji’s the formation of DBM has been laid finally. The aim of this Mandli is to serve Mahamai without any cause.

Although Mahant Shri Chandar Bali is no more with us, yet his name is still alive through Durga Bhajan Mandli Denmark.